Fallacies do not cease to be fallacies because they become fashions.

Comments on: "G. K. Chesterton Quotes: Fallacies do not cease to be fallacies because they become fashions." 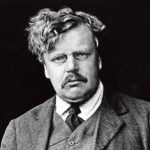