Music is a wind that blows away the years, memories, and fear, that crouching animal I carry inside me.

Comments on: "Isabel Allende Quotes: Music is a wind that blows away the years, memories, and fear, that..." 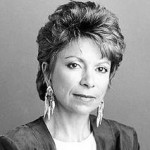