Life in the movie business is like the beginning of a new love affair: it’s full of surprises and you are constantly getting fucked.

Comments on: "David Mamet Quotes: Life in the movie business is like the beginning of a new love..." 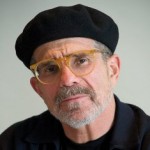