Hatred is what we need. Ideas are born from hatred.

Comments on: "Jean Genet Quotes: Hatred is what we need. Ideas are born from hatred." 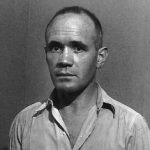 Jean Genet was born in Paris, France. He was a French novelist, playwright, poet, essayist, screenwriter and political activist. He wrote several novels include: Our Lady of the Flowers, The Miracle of the Rose, Funeral Rites, Querelle of Brest, and The Thief's Journal. Prisoner of Love, published in 1986, after Genet's death, is a memoir of his encounters with Palestinian fighters and Black Panthers. He wrote several plays include: The Maids, Deathwatch, The Balcony, The Blacks, and The Screens. He wrote several films include: A Song of Love(also director), The Balcony, Deathwatch, The Maids, and Poor Pretty Eddie.