Art cannot save anybody from anything.

Only a great actor finds the difficulties of the actor's art infinite.

Any work of art that can be understood is the product of journalism.

Art is subject to arbitrary fashion.

Rationalism is the enemy of art, though necessary as a basis for architecture.

Comments on: "Gilbert Sorrentino Quotes: Art cannot save anybody from anything." 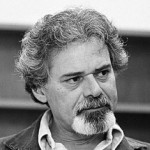 Gilbert Sorrentino was born in Brooklyn, New York City, New York, USA. He was an American novelist, short story writer, poet, professor, and editor. In 1956, he founded the literary magazine Neon with friends from Brooklyn College, including childhood friend Hubert Selby Jr. He edited Neon from 1956 to 1960, then served as editor for Kulchur from 1961 to 1963. He served as a professor of English at Stanford University from 1982 to 1999. He wrote several novels include: The sky changes, Steelwork, Imaginative qualities of actual things, The Abyss of Human Illusion, Mulligan Stew, Blue pastoral, Pack of lies, Gold Fools, and Lunar follies. He wrote several poetry include: Black and White, The Perfect Fiction, Corrosive Sublimate, White Sail, The orangery, Selected Poems 1958–1980, and New and Selected Poems 1958–1998. He was the recipient of numerous awards and honors, including the John Dos Passos Prize for Literature, the American Academy of Arts and Letters Award for Literature, the Lannan Literary Award for Fiction, and the Lannan Lifetime Achievement Award.