And what you thought you came for Is only a shell, a husk of meaning From which the purpose breaks only when it is fulfilled If at all. Either you had no purpose Or the purpose is beyond the end you figured And is altered in fulfilment.

Comments on: "T. S. Eliot Quotes: And what you thought you came for Is only a shell, a husk..." 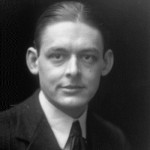