She, she is dead; she’s dead; when thou know’st this, Thou know’st how dry a cinder this world is.

Comments on: "John Donne Quotes: She, she is dead; she’s dead; when thou know’st this, Thou know’st how..." 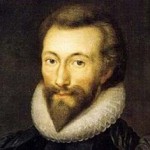 John Donne was born in London, England. He was an English poet, politician, lawyer and priest in the Church of England. He is known as the founder of the Metaphysical Poets, a term created by Samuel Johnson, an eighteenth-century English essayist, poet, and philosopher. He studied at Cambridge University. His works are noted for their strong, sensual style and include sonnets, love poems, religious poems, Latin translations, epigrams, elegies, songs, satires and sermons. He served as a member of Parliament in 1601 and in 1614. In 1621, he was appointed the Dean of St Paul's Cathedral in London. He wrote several poems include: No Man Is an Island, The Flea, Holy Sonnets, A Valediction, The Good-Morrow, Death Be Not Proud, The Canonization, The Sun Rising, The Dream, and Elegy XIX. In 1601, he secretly married Anne More, with whom he had twelve children.