I guess, you make a big studio film, you spend a lot of money on it and you hope people go see it. It's really risky.

Comments on: "John Slattery Quotes: I guess, you make a big studio film, you spend a lot of..." 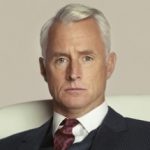