Whatever happens, we have got The Maxim Gun, and they have not.

Comments on: "Hilaire Belloc Quotes: Whatever happens, we have got The Maxim Gun, and they have not." 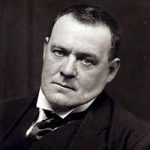 Joseph Hilaire Pierre René Belloc was born in La Celle-Saint-Cloud, Yvelines, France. He was a French-born British author, poet, politician and historian. He earned his BA degree in History(first-class honours) from Balliol College, Oxford University in 1894. He was President of the Oxford Union and later MP for Salford from 1906 to 1910. He wrote several books include: Verses and Sonnets(poetry), The Bad Child's Book of Beasts(juvenile), The Modern Traveller(poetry), The Path to Rome, Mr. Burden, Cautionary Tales for Children(juvenile), On Nothing, On Everything, On Anything, The Four Men, Europe and the Faith(history), History of England, James II(biography), Wolsey(biography), and Heroic Poem in Praise of Wine(poetry).