Allow nature's peace to flow into you as sunshine flows into trees.

The big artist keeps an eye on nature and steals her tools.

The writer is by nature a dreamer - a conscious dreamer.

Nature has planted in our minds an insatiable longing to see the truth.

For the mind disturbed, the still beauty of dawn is nature's finest balm.

Comments on: "John Muir Quotes: Allow nature's peace to flow into you as sunshine flows into trees." 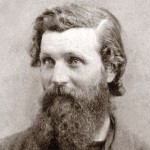