Most people like a little s*x in their novels.

Comments on: "John Sandford Quotes: Most people like a little s*x in their novels." 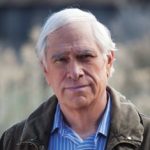