If you are in difficulties with a book, try the element of surprise: attack it at an hour when it isn't expecting it.

Comments on: "H. G. Wells Quotes: If you are in difficulties with a book, try the element of surprise:..." 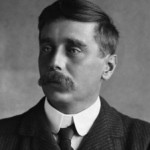 Herbert George Wells, known as H. G. Wells was born in Bromley, Kent, England. He was a English writer in many genres, including the novel, history, politics, social commentary, and rules for war games. He is now best remembered for his science fiction novels and is called a "father of science fiction", along with Jules Verne and Hugo Gernsback. His most notable science fiction novels include The Time Machine, The Island of Doctor Moreau, The Invisible Man, The Sleeper Awakes, The First Men in the Moon, The War in the Air, In the Days of the Comet, and The War of the Worlds. He wrote other novels include: The Wonderful Visit, Love and Mr Lewisham, The Sea Lady, Kipps, A Modern Utopia, Ann Veronica, The History of Mr Polly, The Wheels of Chance, The World Set Free, Men Like Gods, and Tono-Bungay. He earned a BS degree in zoology from the University of London External Programme. In 1889–90 he managed to find a post as a teacher at Henley House School, where he taught A. A. Milne. He was nominated for the Nobel Prize in Literature four times.