It's very exciting to work with people who inspire you.

Comments on: "Jennifer Jason Leigh Quotes: It's very exciting to work with people who inspire you." 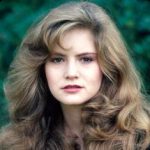