I did math in school, obviously. And I loved all my math teachers.

Comments on: "Jayma Mays Quotes: I did math in school, obviously. And I loved all my math teachers." 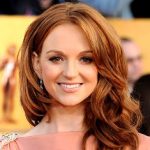