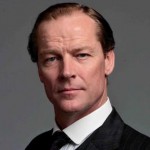 Iain Glen was born in Edinburgh, Scotland. He is a Scottish actor. He is best known for his roles as Dr. Sam Isaacs / Tyrant in the Resident Evil films and for portraying Ser Jorah Mormont on Game of Thrones. His role in several films include: Paris by Night, Mountains of the Moon, Silent Scream, The Young Americans, Beautiful Creatures, Darkness, Spy Sorge, Man to Man, Kingdom of Heaven, The Last Legion, The Iron Lady, Kick-Ass 2, The Bad Education Movie, Eye in the Sky, and Resident Evil: The Final Chapter. His role in television include: Frankie's House(miniseries), Death of a Salesman(TV film), Painted Lady (mini series), Starting Over(TV film), City of Vice(TV series), Spooks(TV series), Jack Taylor(TV series), Downton Abbey(TV series), Prisoners' Wives(TV series), and Cleverman(TV series).