Even as far back as when I started acting at 14, I know I've never considered failure.

Comments on: "Jennifer Lawrence Quotes: Even as far back as when I started acting at 14, I know..." 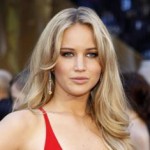