I would never complain about my life, even though I really would like to have a mate.

Comments on: "Jack Nicholson Quotes: I would never complain about my life, even though I really would like..." 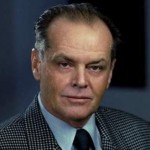 John Joseph "Jack" Nicholson was born in Neptune City, New Jersey, USA. He is an American actor, film director, producer and screenwriter. He is known for playing a wide range of starring or supporting roles, including satirical comedy, romance and dark portrayals of antiheroes and psychopathic characters. Nicholson's 12 Academy Award nominations make him the most nominated male actor in the Academy's history. His role in several films include: One Flew Over the Cuckoo's Nest(won the Academy Award for Best Actor), As Good as It Gets(won the Academy Award for Best Actor), Terms of Endearment(won the Academy Award for Best Supporting Actor), Easy Rider, Five Easy Pieces, The Last Detail, Chinatown, The Passenger, Reds, The Shining, Batman, The Departed, A Few Good Men, The Pledge, About Schmidt, Flight to Fury, Ride in the Whirlwind, The Shooting, Goin' South(also director), and The Two Jakes(also director). He has written several films include: Flight to Fury, Ride in the Whirlwind, The Trip, and Drive, He Said. He produced several films include: Ride in the Whirlwind, The Shooting, and Drive, He Said(also director).