If the career you have chosen has some unexpected inconvenience, console yourself by reflecting that no career is without them.

Comments on: "Jane Fonda Quotes: If the career you have chosen has some unexpected inconvenience, console yourself by..." 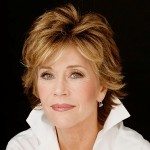