Capitalism has worked very well. Anyone who wants to move to North Korea is welcome.

Comments on: "Bill Gates Quotes: Capitalism has worked very well. Anyone who wants to move to North Korea..." 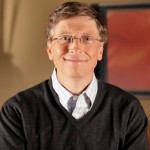