I do see your point, but to me, I'm just a mouse compared to the President of the United States.

Comments on: "Jon Lovitz Quotes: I do see your point, but to me, I'm just a mouse compared..." 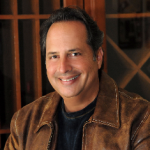