I mean do women like to get the crap scared out of them at the movies? Sure. Of course.

Comments on: "Jerry O'Connell Quotes: I mean do women like to get the crap scared out of them..." 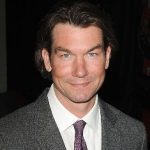