Comments on: "Isabelle Huppert Quotes: Once you have made the decision to do the film, once you have..." 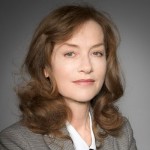