One of the great things about my job is I get to do all of these things that I may not experience had I not been an actor.

Comments on: "Hilary Swank Quotes: One of the great things about my job is I get to do..." 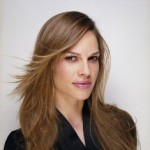