I am forced to say that I have many fiercer critics than myself.

Comments on: "Irwin Shaw Quotes: I am forced to say that I have many fiercer critics than myself." 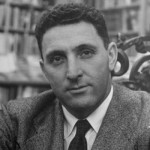