That was the big effect Lord of the Rings had on me. It was discovering New Zealand. And even more precious were the people- not at all like the Australians.

Comments on: "Ian McKellen Quotes: That was the big effect Lord of the Rings had on me. It..." 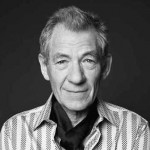