Some of the routines come back very easily. We do it off the top of our heads.

Comments on: "Jerry Stiller Quotes: Some of the routines come back very easily. We do it off the..." 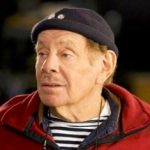