I like to be in waiting rooms with people as they're auditioning, because their terror calms me.

Comments on: "John C. McGinley Quotes: I like to be in waiting rooms with people as they're auditioning, because..." 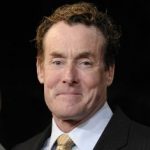