Death is a very important part of life.

I would rather die a meaningful death than to live a meaningless life.

Fear of death has been the greatest ally of tyranny past and present.

Death devours all lovely things; Lesbia with her sparrow Shares the darkness-presently Eve...

I have a rendezvous with Death At some disputed barricade, When Spring comes round with ru...

Eighty percent of success is showing up.

Comments on: "GG Allin Quotes: Death is a very important part of life." 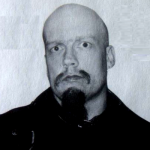 Kevin Michael "GG" Allin was born in Lancaster, New Hampshire, USA. He was an American singer and songwriter. He was best known for his notorious live performances, which often featured transgressive acts, including coprophagia, self-mutilation, and attacking audience members, for which he was arrested and imprisoned on multiple occasions. His lyrics, which often expressed themes of misogyny, pedophilia, blasphemy and racism, polarized listeners and created varied opinions of him within the highly politicized punk community. His albums list shown below: Always Was, Is and Always Shall Be, Hated in the Nation, Dirty Love Songs, Freaks, Faggots, Drunks and Junkies, Doctrine of Mayhem, Aloha From Dallas, The Troubled Troubadour, Res-Erected, and Rock 'n' Roll Terrorist.