Nobody understands me, I'm really sensitive. 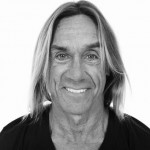 James Newell Osterberg, Jr., known professionally as Iggy Pop was born in Muskegon, Michigan, USA. He is an American singer-songwriter, film score composer, record producer and actor. He is vocalist of influential protopunk band The Stooges, having become known, since the late 1960s, for his outrageous and unpredictable stage antics. His music has encompassed a number of styles over the course of his career, including garage rock, punk rock, hard rock, art rock, new wave, jazz and blues. His albums list shown below: The Idiot, Lust for Life, New Values, Soldier, Party, Zombie Birdhouse, Blah-Blah-Blah, Brick by Brick, American Caesar, Naughty Little Doggie, Avenue B, Skull Ring, A Million in Prizes: The Anthology, and Post Pop Depression. His singles list shown below: "Lust for Life", "Real Wild Child (Wild One)", "Candy", "Bang Bang", and "Gardenia". His role in several films include: The Color of Money, Hardware, Cry-Baby, Dead Man, Tank Girl, Atolladero, The Crow: City of Angels, Snow Day, Coffee and Cigarettes, Suck, Art House, Asthma, and Blood Orange.