No, sometimes we just have to take liberties because the idea was so good. I wish we'd just gone with the idea that Patsy had been a man. It would have been fantastic.

Comments on: "Jennifer Jane Saunders Quotes: No, sometimes we just have to take liberties because the idea was so..." 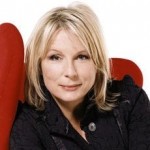 Jennifer Jane Saunders was born in Sleaford, Lincolnshire, England. She is an English comedian, screenwriter and actress. She first found widespread attention in the 1980s when she became a member of The Comic Strip after graduating from the Central School of Speech and Drama in London. Her role in several films include: The Supergrass, Eat the Rich, In the Bleak Midwinter, Muppet Treasure Island, Spice World, Fanny and Elvis, Absolutely Fabulous (also writer), Shrek 2 (People's Choice Awards for voicing the evil Fairy Godmother- 2005), Coraline (only voice), Minions (only voice), and sing (only voice). Her role in television include: French and Saunders (with Dawn French, Comedy TV series, also writer, Writers' Guild of Great Britain Award for TV Light Entertainment- 1991, She and French received a BAFTA fellowship in 2009) and Absolutely Fabulous, also known as Ab Fab (Comedy TV series, also writer, BAFTA Television Award for Best Comedy Series- 1993, International Emmy Award for popular arts-1994, BAFTA Television Award for Best Female Performance In a Comedy Programme- 2012). She married to Adrian Edmondson in 1985. They have three daughters: Eleanor "Ella" Rose, Beatrice "Beattie" Louise, and Freya.