When you sit down and watch something alone, you're going to watch it for what it is.

Comments on: "John Turturro Quotes: When you sit down and watch something alone, you're going to watch it..." 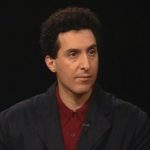