I think I was afraid of what I might say when I got onto someone's stage or in front of someone's camera.

Comments on: "Jeffrey Wright Quotes: I think I was afraid of what I might say when I got..." 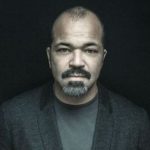 Jeffrey Wright was born in Washington, D.C., USA. He is an American actor. He earned a BA degree in Political Science from Amherst College in 1987. His role in several films include: Presumed Innocent, Basquiat, Cement, Casino Royale, Quantum of Solace, Source Code, A Single Shot, The Hunger Games: Catching Fire, The Hunger Games: Mockingjay - Part 1, and The Hunger Games: Mockingjay - Part 2. His role in television include: Boycott (TV film), Angels in America (miniseries, Won- Emmy Awards for Outstanding Supporting Actor in a Miniseries or a Movie, Golden Globe Awards for Best Performance by an Actor in a Supporting Role in a Series), Blackout (TV film), Boardwalk Empire (crime drama TV series), Confirmation (TV film), and Westworld (TV series).