Comments on: "James Francis Durante Quotes: Be nice to people on your way up because you meet them on..." 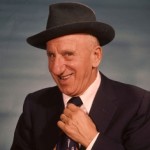 James Francis "Jimmy" Durante was born in New York City, New York, USA. He was an American singer, pianist and comedian. He dropped out of school in seventh grade to become a full-time ragtime pianist. His albums list shown below: September Song, Jimmy Durante's Way of Life..., and Songs For Sunday. His songs list shown below: "Make Someone Happy", "Inka Dinka Doo", "Old Man Time", "The Glory of Love", "Young at Heart", "Frosty The Snowman", "Blue Bird of Happiness", "A Real Piano Player", and "Smile". His role in several films include: Roadhouse Nights, The Cuban Love Song, The Wet Parade, Speak Easily, Hell Below, Palooka, Hollywood Party, Carnival, Melody Ranch, The Man Who Came to Dinner, Music for Millions, On an Island with You, and The Last Judgment. He often referred to his nose as the Schnozzola, and the word became his nickname.