I don't know why Sinclair Lewis fell in love with me. He didn't get even the slightest response from me. But his letters were lovely. And the poems he wrote me were lovely. I used some of them in my book.

Comments on: "Fay Wray Quotes: I don't know why Sinclair Lewis fell in love with me. He didn't..." 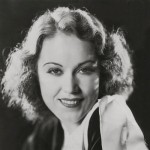