I don't necessarily want kids. A lot of our friends are having children and I don't know if it's for me. I haven't come down hardcore on either side of the argument. I think when people come from a stable family having children becomes a celebration and I'm not sure it would be that way for me.

Comments on: "Jon Hamm Quotes: I don't necessarily want kids. A lot of our friends are having children..." 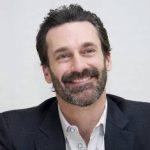