I am back in Los Angeles after a very successful run in Chicago as Billy Flynn.

Comments on: "Greg Evigan Quotes: I am back in Los Angeles after a very successful run in Chicago..." 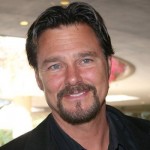 Gregory Ralph "Greg" Evigan was born in South Amboy, New Jersey, USA. He is an American actor. His role in several films include: Scorchy, DeepStar Six, Spectre, Cerberus, Hoboken Hollow, 100 Million BC, and 6 Guns. His role in television include: B. J. and the Bear, My Two Dads, P.S. I Luv U, TekWar, A Year at the Top, Masquerade, Pacific Palisades, Earthquake in New York(TV movie), Lies Before Kisses(TV film), Straight from the Heart(TV movie), Mail Order Bride(TV film), Heat Wave(TV film), and Once Upon a Holiday.