It is my opinion that everything must be based on a simple idea. And it is my opinion that this idea, once we have finally discovered it, will be so compelling, so beautiful, that we will say to one another, yes, how could it have been any different.

Comments on: "John Archibald Wheeler Quotes: It is my opinion that everything must be based on a simple idea...." 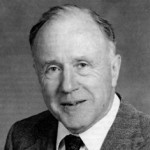 John Archibald Wheeler was born in Jacksonville, Florida, United States. He was an American theoretical physicist. He worked with Niels Bohr in explaining the basic principles behind nuclear fission. Together with Gregory Breit, Wheeler developed the concept of the Breit–Wheeler process. He received his PhD in Physics under the supervision of Karl Herzfeld from Johns Hopkins University in 1933. He served as a professor of Physics at Princeton University from 1938-1976. At Princeton he supervised 46 PhDs, more than any other professor in the Princeton physics department. He wrote several books include: Spacetime Physics (with Edwin F. Taylor), Einstein's Vision, Gravitation (with Charles W. Misner, Kip S. Thorne), Frontiers of time, Quantum Theory and Measurement, A Journey into Gravity and Spacetime, At Home in the Universe, Gravitation and Inertia (with Ignazio Ciufolini), Geons, Black Holes, and Quantum Foam, and Exploring Black Holes (with Edwin F. Taylor). He received many awards, including Albert Einstein Award, Enrico Fermi Award, Franklin Medal, National Medal of Science, Oersted Medal, Matteucci Medal, Wolf Prize in Physics, and Einstein Prize.