If you were the only suspect in a senseless bloodbath, would you be standing the the horror section?

Comments on: "Jamie Kennedy Quotes: If you were the only suspect in a senseless bloodbath, would you be..." 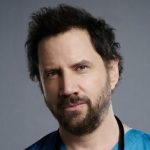