It's a major part of world history that men are trying to kill each other. It's just one slaughter after the other. We talk about it, but no one's really listening.

Comments on: "Fred Ward Quotes: It's a major part of world history that men are trying to kill..." 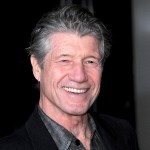