I do it because I love acting, I love working, and whether it's radio, television, films, theater, I don't care as long as I can get out there and do it.

Comments on: "Joan Collins Quotes: I do it because I love acting, I love working, and whether it's..." 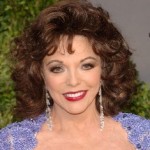 Dame Joan Henrietta Collins was born in Paddington, London, England. She is an English actress, author and novelist. She was educated at the Francis Holland School, London and then trained at the Royal Academy of Dramatic Art. At the age of 17, she was signed to the J. Arthur Rank Film Company, a British film studio. Her role in several films include: The Woman's Angle, Decameron Nights, Our Girl Friday, The Virgin Queen, Sea Wife, Stopover Tokyo, Seven Thieves, The Executioner, Quest for Love, Empire of the Ants, Fearless, Zero to Sixty, The Bitch, and The Time of Their Lives. Her role in television include: Dynasty (TV series, Won- Golden Globe Award for Best Actress in 1983), Making of a Male Model (TV film), The Cartier Affair (TV film), Sins (miniseries, also executive producer), Monte Carlo (miniseries, also executive producer), and Pacific Palisades (TV series). She has written several books include: Past Imperfect (autobiography), The Joan Collins Beauty Book (nonfiction), Prime Time (novel), Love and Desire and Hate (novel), My Secrets (nonfiction), Second Act (autobiography), Too Damn Famous (novel), Misfortune's Daughters (novel), and The World According to Joan (nonfiction).