You just keep feeding hogwash to people, and pretty soon they'll eat it.

Comments on: "Holly Near Quotes: You just keep feeding hogwash to people, and pretty soon they'll eat it."

Quotes by Holly Near 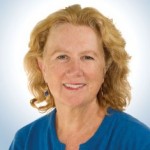