I'd sleep under a Vermeer.

Comments on: "John Lithgow Quotes: I'd sleep under a Vermeer." 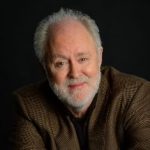