Hero shows you how to solve the problem - yourself.

Comments on: "Jet Li Quotes: Hero shows you how to solve the problem - yourself." 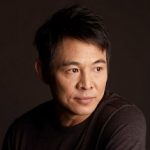