One time they traded me for seven horses. Seven stunt horses.

Comments on: "James Stewart Quotes: One time they traded me for seven horses. Seven stunt horses." 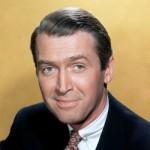