History is, strictly speaking, the study of questions; the study of answers belongs to anthropology and sociology.

Comments on: "W. H. Auden Quotes: History is, strictly speaking, the study of questions; the study of answers belongs..." 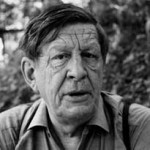