The permanent temptation of life is to confuse dreams with reality. The permanent defeat of life comes when dreams are surrendered to reality.

Comments on: "James A. Michener Quotes: The permanent temptation of life is to confuse dreams with reality. The permanent..."

Quotes by James A. Michener 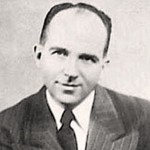 James Albert Michener was born in Doylestown, Bucks County, Pennsylvania, USA. He was an American novelist, philanthropist and short story writer. He was also known for his meticulous research behind the books. He wrote several novels include: The Fires of Spring, Sayonara, Hawaii, Caravans, The Source, The Drifters, Centennial, Chesapeake, The Covenant, Space, Poland, Texas, Legacy, Alaska, Caribbean, Journey, The Novel, South Pacific, Mexico, Recessional, Miracle in Seville, and Matecumbe. He wrote other books include: Tales of the South Pacific(collection of short stories), Return to Paradise(collection of short stories), The Voice of Asia, The Bridge at Andau, Iberia, The Watermen, The Eagle and the Raven, My Lost Mexico, and The World Is My Home(autobiography). He became a major philanthropist, donating more than $100 million to educational, cultural, and writing institutions.