This is the precept by which I have lived: Prepare for the worst; expect the best; and take what comes.

Comments on: "Hannah Arendt Quotes: This is the precept by which I have lived: Prepare for the worst;..." 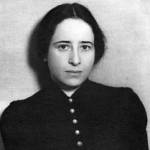