I don't believe in happy endings, but I do believe in happy travels, because ultimately, you die at a very young age, or you live long enough to watch your friends die. It's a mean thing, life. 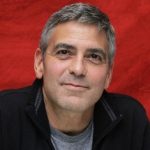