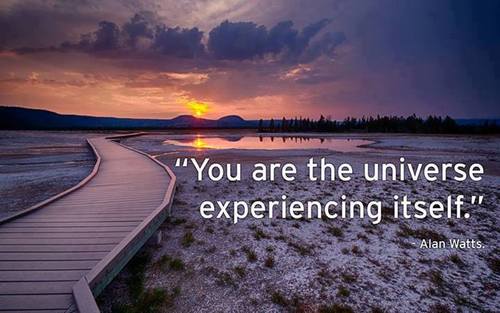 You are the universe experiencing itself.

Comments on: "Alan Wilson Watts Quotes: You are the universe experiencing itself." 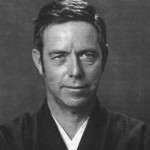 Watts was born to middle class parents in the village of Chislehurst, Kent, in 1915. He was sent to boarding schools from early years. Watts attended The King's School next door to Canterbury Cathedral. Hence, when he graduated from secondary school, Watts was thrust into the world of employment, working in a printing house and later a bank. He spent his spare time involved with the Buddhist Lodge and also under the tutelage of a "rascal guru" named Dimitrije Mitrinović.
Watts also read widely in philosophy, history, psychology, psychiatry and Eastern wisdom. By his own reckoning, and also by that of his biographer Monica Furlong, Watts was primarily an autodidact. His involvement with the Buddhist Lodge in London afforded Watts a considerable number of opportunities for personal growth. Through Humphreys, he contacted eminent spiritual authors and prominent theosophists like Alice Bailey. In 1936, aged 21, he attended the World Congress of Faiths at the University of London, heard D. T. Suzuki read a paper, and afterwards was able to meet this esteemed scholar of Zen Buddhism. Beyond these discussions and personal encounters, Watts absorbed, by studying the available scholarly literature, the fundamental concepts and terminology of the main philosophies of India and East Asia.
In 1936, Watts' first book was published, The Spirit of Zen, which he later acknowledged he mainly digested from the writings of Suzuki. In early 1951, Watts moved to California, where he joined the faculty of the American Academy of Asian Studies in San Francisco. Hasegawa, in particular, served as a teacher to Watts in the areas of Japanese customs, arts, primitivism, and perceptions of nature. Besides teaching, Watts served for several years as the Academy's administrator.
On November 16, 1973, he died in his sleep of heart failure.