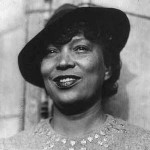 Zora Neale Hurston was an American folklorist, anthropologist, and author during the time of the Harlem Renaissance. Of Hurston's four novels and more than 50 published short stories, plays, and essays, she is best known for her 1937 novel Their Eyes Were Watching God.
Hurston was the fifth of eight children of John Hurston and Lucy Ann Hurston. Her father was a Baptist preacher, tenant farmer, and carpenter, and her mother was a school teacher. She was born in Notasulga, Alabama on January 7, 1891, where her father grew up and her grandfather was the preacher of a Baptist church. Her family moved to Eatonville, Florida, the first all-Black town to be incorporated in the United States, when she was three. Hurston said she always felt that Eatonville was "home" to her and sometimes claimed it as her birthplace  Her father later became mayor of the town, which Hurston would glorify in her stories as a place where African Americans could live as they desired, independent of white society. In 1901, some northern schoolteachers visited Eatonville and gave Hurston a number of books that opened her mind to literature, and this may be why she sometimes describes her "birth" as taking place in that year. Hurston spent the remainder of her childhood in Eatonville, and describes the experience of growing up in Eatonville in her 1928 essay "How It Feels to Be Colored Me".
In 1918, Hurston began undergraduate studies at Howard University, where she became one of the earliest initiates of Zeta Phi Beta Sorority and co-founded The Hilltop, the University's student newspaper. While there she took courses in Spanish, English, Greek and public speaking and earned an Associate's Degree in 1920. In 1921 she wrote an essay which qualified her to become a member of Alaine Locke's literary club, The Stylus. Hurston left Howard in 1924 and in 1925 was offered a scholarship to Barnard College where she was the college's sole black student. Hurston received her B.A. in anthropology in 1927, when she was 36. While she was at Barnard, she conducted ethnographic research with noted anthropologist Franz Boas of Columbia University. She also worked with Ruth Benedict as well as fellow anthropology student Margaret Mead. After graduating from Barnard, Hurston spent two years as a graduate student in anthropology at Columbia University.